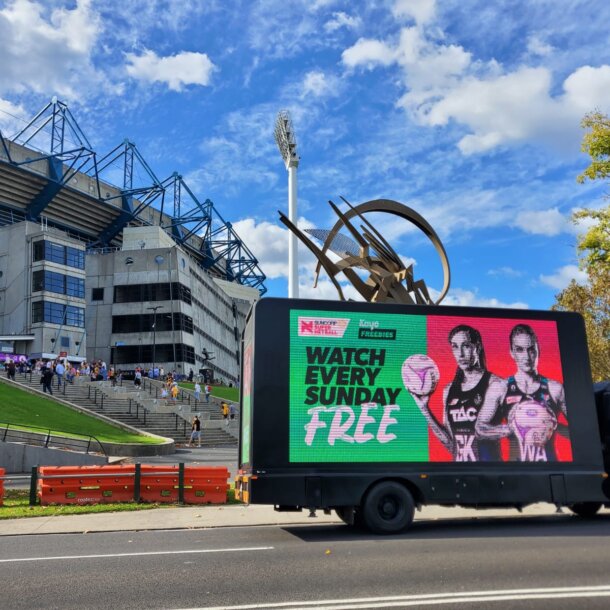 At the start of the year, we were fortunate enough to deliver an OOH media campaign for the online streaming service Kayo. This project consisted in the use of our outdoor media products: the Digital Mobile Billboard and Bike Boards.

The two outdoor media products were used to promote the Suncorp Netball series that took place in Sydney and Melbourne.

The aim of the campaign was to use both of the outdoor media products to generate awareness of the free-to-watch series at multiple sporting events.

The Bike Boards were used to access areas of Melbourne and Sydney that larger outdoor media formats could not.

In saying this, the Bike Boards we able to get into inaccessible key locations in and around the MCG, John Cain Arena, Suncorp Stadium and Olympic Park.

Additionally, the bike riders handed out flyers containing the Netball fixture in heavy foot traffic locations to sporting event attendees in both States.

Major benefits of combining the outdoor media formats include:

Overall, Kayo is the perfect example of how multiple outdoor media formats can be used to generate enhanced brand recognition and awareness.

Do you require any further info?

If you have any questions, head to our website and/or give us a call.

NFTs on the Move in Brisbane using the Digital Mobile Billboard